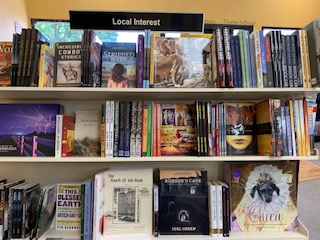 We know that writing and publishing a book are achievements worthy of celebration, and we're proud to sell books by these and other Nebraska authors at Chapters. Click on the author's name for more books by that author.

Those highlighted below are only a sampling of the many Nebraska authors, both classic and contemporary, featured at Chapters. We work with more than 100 authors from Nebraska and the Midwest. Check back often as we'll change this list--or stop by Chapters and see the actual books!

If you're an author who would like to place your book in our store, our guidelines for authors are here.

Authors in red below will be participating in our authors' showcase June 26, 2021. Event details are HERE.

John Achor's writing assignments have appeared in a variety of regional, and national publications, and he sold over two dozen articles to an international magazine. He has also published three mystery novels featuring his female amateur sleuth, as the Casey Fremont series, with an Alex Hilliard thriller nearing publication.

Lucy Adkins' poetry has been nominated for a Pushcart Prize and has appeared in many journals. She’s also co-authored two books of non-fiction, Writing in Community, recipient of an “Ippy” Award, and The Fire Inside, just released. She’s been a writing workshop leader for many years.

Alan J. Bartels grew up exploring the wildlands of Nebraska. Over breakfast after viewing prairie chickens with Jane Goodall in the Nebraska Sandhills, the idea for this children's book was born. Alan is a lifelong Nebraskan and explores Nebraska today as the editor of Nebraska Life Magazine.

Susan Grady Bristol is a short story writer with stories in numerous anthologies including Chicken Soup for the Soul books, 13th Floor and Ordinary Miracles in Nursing. She has been writing since she was old enough to hold a pen. Susan belongs to the Nebraska Writer's Guild, the Omaha Night Writers and My Thoughts Exactly writing group in Fremont.

Charlotte Endorf has been married to an awesome man, Papa aka Kevin Endorf over 30 years. This is the first book she has co-written with her four-year-old grandson Gunnar Doty. Charlotte was in a bad car accident a few years ago, which gave her the time to begin writing children's books.

Becky Faber is the author of One Small Photo. She has published in Nebraska Presence (One Book One Nebraska 2018); Women Write Resistance; Rural Voices; The Midwest Quarterly (Three Generations of Nebraska Poets); Blue Collar Review; and Lyrical Iowa, with honors from the Poetry Society of Virginia and the Iowa Poetry Association.

Marie Nolan Fiala resides in Raymond, Nebraska with her husband and two children.  A first time author, she has enjoyed previous careers as a news reporter and mental health counselor.  Marie merges her love of the written word with spirituality in the hopes of helping those going through difficult times.

Tom Frye has worked for the past 40 years as an advocate for troubled youth. He began his career when still in high school, serving as a street contact for a runaway shelter. It was during his time as a worker at a detention facility for delinquent youth, that he began writing stories for the residents and he knew he had discovered a way to connect with troubled kids.

Gretchen Garrison lives with her husband and four kids on a Milford area acreage. Her blog is Odyssey Through Nebraska. She has also written three books: Detour Nebraska: Historic Destinations and Natural Wonders; A History Lover’s Guide to Lincoln and 100 Things to Do in Lincoln Before You Die.

Ruth Harper is a self-taught artist from England. She first illustrated the classic The Kissing Hand, then Sassafras, and Happy Mamas, and Otters, Snails and Tadpole Tails (2019). Ruth loves to echo nature in her work and believes it brings imagination, creativity, comfort, and sweet love to everyone. She now lives in the roly-poly Iowa hills with an adorable husband, a dog and cat, and six marvelous grown-up kids with lots of grandchildren. She is proud to be represented by Deborah Warren of East West Literary Agency and excitedly working on her next book project.

Shennon Helms is a French and Spanish teacher in a rural Nebraska K-12 school. She also teaches Tai Chi. She has three children. When she is not working or chasing her kids to their activities with her husband, she enjoys reading, writing, and acting in local productions. She writes poetry, short stories, song lyrics, and paranormal and science fiction novels. Her debut novel Lost Daughter of the Stars is coming in 2019.

Heidi Hermanson is a first-generation Nebraskan. She received her MFA from the University of Nebraska at Omaha. In her spare time she would like to open a library of towns that no longer exist and learn dialects of the seventeen-year cicadas.

Blaine Kistler writes the kind of stories she finds intriguing and passionate and believes stories are meaningful only if they have an audience. She grew up the oldest of six girls, and while they live widely separated, their love keeps them close in heart. She enjoys reading, swimming, and her pets. As her characters are on a journey of discovery, so too is she.

Sgt. Mark Langan relives his front-row seat working the seamier side of crime during his decorated twenty-six year career with the Omaha Police Department. His book, Busting Bad Guys, delivers a graphic and authentic look at solid policing on the streets of America’s heartland and takes the readers inside high-adrenaline, top secret investigations while trying to outsmart the criminals.

Tammy Marshall is a longtime columnist for the Norfolk Daily News. She's published two books, The Clearwater House and State of Georgia . . . and Other Writings, with more on the way soon. She's just retired after 30 years of teaching to devote herself fully to writing, reading, traveling, and riding her Harley-Davidson motorcycle.

Mark Miller lives in Genoa, Nebraska. He has been a high school teacher and coach, journalist, business writer and father. And he writes stories. He has published short fiction in a number of journals and magazines, including the University of Nebraska's Prairie Schooner, where a story of his, "Hog Wild" won the Marie Sandoz short Fiction Award.

Charlene Neely's books include The Lights of Lincoln and The Corn Fairy's Wigs & Other Poems. She co-edited The Guide to More Nebraska Authors with Gerry Cox. As one of the Poetry Ladies, she shares her love of poetry with school children. She is a member of the Nebraska Writers Guild and Lincoln Chapparal Poets.

R. J. Post grew up in Ohio and Kansas, where he graduated from a small, private college. He was a newspaper reporter, editor and manager for more than 30 years and now works in marketing. He enjoys bookstores, vinyl records and dysfunctional love songs. R.J. lives in Grand Island.

Marje (Smith) Perkins grew up on a small Nebraska farm southeast of Cambridge. She graduated from Nebraska Wesleyan University and was an elementary and special education teacher in Nebraska and California. She and her husband Bob are retired and living in Mesa, Arizona.

Jim Reisdorff, David City, Nebraska, has had a lifelong interest in railroads and their role in American society. He has authored over a dozen books on Nebraska's rail history. He also operates South Platte Press, which has published about 100 titles for other authors regarding various railroad topics.

Lora Rivers has been writing all her life: newspaper stories, poetry, websites, educational materials, TV commercials, and scripts for documentary films. She holds a bachelor's degree in speech communication and a master's degree in education. She lives outside of Lincoln where she likes to explore nature and play games with her grandchildren.

Rhonda Rush considers herself a word enthusiast, always looking to improve her literary skills. She writes to be a source of inspiration and encouragement. Writing has been like therapy, allowing her to spill everything onto the page in order to discover newfound freedom. She enjoys documenting her experiences through her poems and other writings as she continues to pursue her dreams of traveling and promoting her books. She is also a member of Nebraska Writer's Guild.

Marjorie Saiser has received four Nebraska Book Awards as well as an Academy of American Poets Award and the Mildred Bennet Award for Exceptional Literary Contributions. Her most recent book is The Woman in the Moon.

Linda Svoboda is a wife and mother, and absolutely loves to write children's books. She has a passion to write books in which kids learn character qualities. Her book, A Precious Day At The Farm, is a book in which children can experience life in the country with a wonderful ending.

Kathi Wagner is the author of 13 children's books. She enjoys making children laugh and helping them learn to love to read! Her Ultimate Jokiest Joking Joke Book Ever Written . . . No Joke! Is coming in September.

Debra Kleve White is a first time author; her book is titled, The Spirit of Nebraska:  A History of Husker Gameday Traditions. White is a graduate of UNL, where she was a cheerleader for three years. Her interest in Husker athletics and game day pageantry inspired her research for this book.

The Fire Inside: A Companion for the Creative Life (The Essential Writing and Creativity Ser #2) (Paperback)

When The Lost Seek The Lonely (Paperback)

Waking to the Dream (Paperback)

State of Georgia . . . and Other Writings (Paperback)

The Spirit of Nebraska: A History of Husker Game Day Traditions - the Tunnel Walk, Mascots, Cheer, and More (Hardcover)