More in Time: A Tribute to Ted Kooser (Paperback) 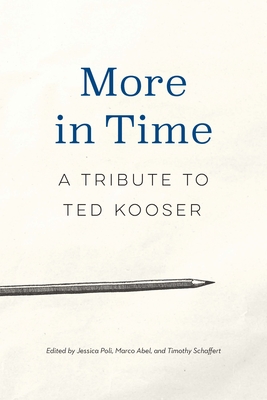 More in Time is a celebration and tribute to Ted Kooser, two-time U.S. Poet Laureate, winner of the Pulitzer Prize for Poetry, and Presidential Professor of the University of Nebraska. Through personal reflections, essays, and creative works both inspired by and dedicated to Kooser, this collection shines a light on the many ways the midwestern poet has affected others as a teacher, mentor, colleague, and friend, as well as a fellow writer and observer-of-the-world. The creative responses included in this volume are reflective of the impact Kooser has had in his connections to other writers, while also revealing glimpses of his distinct way of seeing.

"To recognize his [Ted Kooser's] retirement from conducting the beloved personal tutorials he has provided to graduate students at UNL, 68 of his former students, university colleagues and poetic peers have produced More in Time, a compilation of poems and memories of Kooser's influence upon their lives."—J. Kemper Campbell, Lincoln Journal Star

“Ted Kooser is kind, as we know from every essay and poem published in this volume to honor the poet’s retirement from the University of Nebraska. Ted Kooser is accomplished and beloved as teacher, writer, poet, editor, painter and friend. And Ted Kooser leaves the public life of the university as a national poet laureate and Pulitzer Prize winner to become what he has always been, a private man of genius. Long may he thrive and publish, labor in his fields, make and paint the birdhouses that adorn our trees, the gorgeous chicken coop in his yard, and write poems so distilled that our souls bend in delight.”—Hilda Raz, author of Letter from a Place I’ve Never Been: New and Collected Poems, 1986–2020

“Ted Kooser’s poems are as natural and true as anything I know in American poetry. I love his honed-down style, his subtle humor, and his attention to a detail that will shine with kindness and grace by the end of the poem.”—Joyce Sutphen, author of Carrying Water to the Field

“When I arrived in the U.S., I experienced an immense culture shock that was incredibly difficult to shake off, and it held me back, held my tongue back in my other classes. But each time I was in Ted’s presence, I grew fully into myself in ways that weren’t so apparent in his absence.”—Saddiq Dzukogi, author of Your Crib, My Qibla

“Ted’s office was a place of magic for me for the few years that I did tutorials with him. . . . He deeply respected the mystery that arose in the course of writing, the surprising element of the poem that a poet might not see herself, until an astute reader pointed it out.”—Katie Schmid, author of Nowhere