Nebraska's Bucks and Bulls: The Greatest Stories of Hunting Whitetail, Mule Deer, and Elk in the Cornhusker State (Paperback) 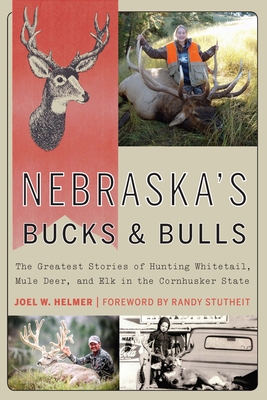 Eclipsing Memorial Stadium on a Husker football game day, deer season is arguably the largest single sporting event of the year in Nebraska, with more than one hundred thousand hunters going afield with the hopes of tagging a trophy buck or bull.

Nebraska’s Bucks and Bulls tells the stories and shares the photographs of the greatest whitetail, mule deer, and elk shot in Nebraska. Collected through firsthand interviews with the hunters, these personal hunting stories span the decades from the mid-1940s through the 2010s. Each story shares the excitement and adventure of the hunt while weaving in Nebraska history, ecology, and geography. Photographs of the trophy animals showcase not only the quality and variety of big-game hunting in Nebraska but also the changes in hunting clothes, gear, guns, and vehicles through the state’s history.

Recounted by Joel W. Helmer, an avid hunter and official measurer for the Boone and Crockett Club, which created the scoring system for measuring North American big-game animals, each chapter tells the story of a buck or bull certified through official state or national records books. Nebraska’s Bucks and Bulls has finally gathered the state’s greatest hunting tales in one place.

Joel W. Helmer is a professor of geography at Concordia University in Nebraska, a freelance outdoor writer, and a lifelong hunter. His work has been published in Nebraskaland Magazine, Outdoor Life, American Hunter, and Outdoor Oklahoma, among others. Randy Stutheit is the Nebraska Big Game Trophy Records Coordinator.

“Nebraska has long been a sleeper state for big game, and this book backs up that claim with tons of facts and photos. If you’re a fan of outstanding Great Plains bucks and bulls, you need to read every page.”—Gordon Whittington, editor in chief of North American Whitetail

“Entertaining and informative, this collection of stories will serve as an important chapter in the larger story of big-game hunting in Nebraska.”—Eric Fowler, regional editor of Nebraskaland Magazine

“Both a nostalgic look back and a jubilant look ahead, . . . this book is an ideal gift for veteran hunters who want to step back and remember and for new hunters who want to understand where we’ve come from and where we, as sportsmen, can go.”—Frank Miniter, editor in chief of America’s First Freedom magazine and a New York Times best-selling author