There Goes the Neighborhood (Hardcover) 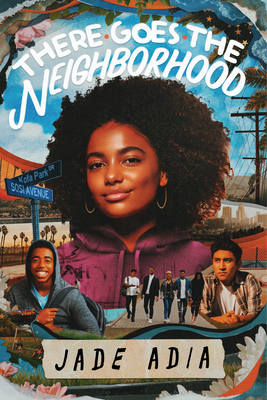 A raised fist against the destructive forces of gentrification and a love letter to communities of color everywhere, Jade Adia's unforgettable debut tells the darkly hilarious story of three best friends willing to do whatever it takes to stay together.

The gang is fake, but the fear is real.

Rhea’s neighborhood is fading away—the mom-and-pop shops of her childhood forced out to make space for an artisanal kombucha brewery here, a hot yoga studio there. And everywhere, the feeling that this place is no longer meant for her. Because while their little corner of South L.A. isn’t perfect, to Rhea and her two best friends, it’s something even more important—it’s home. And it’s worth protecting.

But as more white people flock to their latest edgy, urban paradise for its cheap rent and sparkling new Whole Foods, more of Rhea’s friends and family are pushed out. Until Rhea decides it’s time to push back. Armed with their cellphones and a bag of firecrackers, the friends manipulate social media to create the illusion of gang violence in their neighborhood. All Rhea wanted to do was protect her community. Her friends. Herself. No one was supposed to get hurt. No one was supposed to die.

But is anyone ever really safe when you’re fighting power with fear?

Born and raised in South LA, Jade Adia writes stories about gentrification, Black teen joy, and the sh*tshow that is capitalism. She holds a Bachelor’s degree in Ethnicity, Race & Migration, and a certificate in Human Rights. She recently survived law school, graduating with a specialization in Critical Race Studies. There Goes The Neighborhood is her debut novel. Find her online at www.jadeadia.com and on Instagram @jadeadia.

"A transcending story of what it looks like to be uprooted and how far you'll go to stay intact. Beautifully done and laced with the constant reminder of how friends aren't only family, they're also home."——Britney S. Lewis, author of The Undead Truth of Us

"In this riveting portrait of community care, debut author Adia paints the pain, danger, and consequences of gentrification with visceral clarity, highlighting changes such as displacement and fractured families via Rhea’s biting and witty voice and her unwavering loyalty to her hometown."——Publishers Weekly

"Outstanding. This book packs such a fierce, fantastic punch in the best possible way. I devoured it and still wanted more. Alive with love and fully awake to the joy, hilarity, rage, and heartache of this broken world, There Goes the Neighborhood fires on all cylinders and takes no prisoners."——Daniel José Older, New York Times best-selling author of Shadowshaper

There Goes the Neighborhood is part coming-of-age, part thrilling mystery, with a razor-sharp wit that cuts deep. This book radiates joy while not shying away from necessary truths."——Elise Bryant, author or Happily Ever Afters and One True Loves

“There Goes the Neighborhood is the epitome of ‘for the culture.’ Adia’s debut is hilarious, heartfelt, and sometimes as bitter as it is sweet. With a trio of friends who will do anything to stay together and protect their community, you’ll discover a new found family to root for and a craving for all your favorite street food. A true love letter to the Block and its people."——Lane Clarke, author of Love Times Infinity