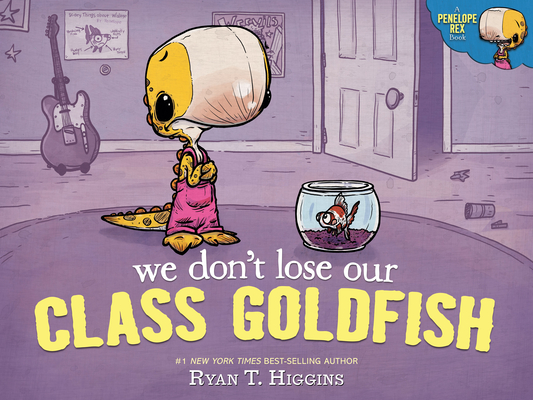 Penelope Rex faces her biggest (and fishiest) fear in this companion to the #1 New York Times best-selling We Don't Eat Our Classmates by Ryan T. Higgins.

Penelope Rex has one fear: Walter, the class goldfish. So when Mrs. Noodleman tells the kids that they'll be taking turns bringing Walter home, Penelope gets carried away by her anxious imagination. The weekend has a rocky start—from Walter ominously licking his lips to a sleepless night where the fish's bowl appears to move closer and closer to Penelope's bed. But then Walter goes missing! Penelope must face her fear to find him and realizes along the way that there's more to Walter than his chomping jaws.

Join Penelope Rex in her other adventures:

Ryan T. Higgins (ryanthiggins.com) is the author and illustrator of the New York Times best-selling Mother Bruce, which received the E. B. White Read-Aloud Award and the Ezra Jack Keats New Illustrator Honor. In addition to the Mother Bruce series, Ryan is also the author and illustrator of Norman Didn’t Do It!, We Don’t Eat Our Classmates, We Will Rock Our Classmates, BE QUIET!, and What About Worms!?, an Elephant & Piggie Like Reading! book. He lives in Maine with his three children, three dogs, three cats, one gecko, one tortoise, and one wife.

PRAISE FOR WE WILL ROCK OUR CLASSMATES

A thoughtful and humorous story. Penelope’s latest adventure is a welcome addition for young readers and a suggested first purchase for all libraries.—School Library Journal (starred review)

PRAISE FOR WE WILL ROCK OUR CLASSMATES