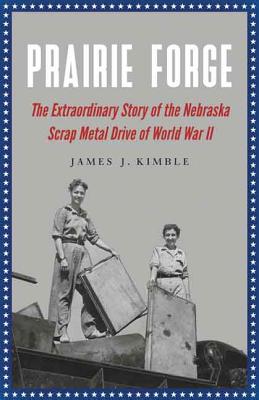 In the wake of Pearl Harbor, President Roosevelt called for the largest arms buildup in our nation's history. A shortage of steel, however, quickly slowed the program’s momentum, and arms production fell dangerously behind schedule. The country needed scrap metal. Henry Doorly, publisher of the Omaha World-Herald, had the solution. Prairie Forge tells the story of the great Nebraska scrap drive of 1942—a campaign that swept the nation and yielded five million tons of scrap metal, literally salvaging the war effort itself.
James J. Kimble chronicles Doorly’s conception of a fierce competition pitting county against county, business against business, and, in schools across the state, class against class—inspiring Nebraskans to gather 67,000 tons of scrap metal in only three weeks. This astounding feat provided the template for a national drive. A tale of plowshares turned into arms, Prairie Forge gives the first full account of how home became home front for so many civilians.

James J. Kimble is an associate professor in the Department of Communication and the Arts at Seton Hall University. He is the coproducer of Scrappers: How the Heartland Won World War II, a feature documentary on the 1942 scrap drives.

"Kimble's research and interviews breathe life into this little-known contribution to the U.S. war effort. Prairie Forge is an entertaining, well-written narrative of the tremendous role Nebraskans, Henry Doorly, and scrap metal played in shaping the early years of the war."—Tom Mele, Scrap Magazine

"Solid, thoroughly researched. . . . [Prairie Forge] should be on the shelf of every Nebraska public library."—Bruce D. Cohen, H-Net

"With ease, Kimble tells a story that goes beyond junk collecting and illuminates the fascinating tale of how Nebraska helped forge the way for one of the most significant military victories in Western history."—Erin Seaward-Hiatt, L Magazine

"A worthwhile contribution and an enjoyable read on a topic of surprising interest and importance."—Maury Klein, Journal of American History